A Time for Music 32 – The Camp HASC Concert!

Sunday, January 6th, 2019, was a date that will go down in Jewish music history. It was the 32nd annual HASC, A TIME for Music concert, and it was one for the books. The concert was produced by the amazing Eli Gerstner (EG Productions), and featured an all-star cast, with many singers making their HASC debut performances.

Upon walking into David Geffen Hall at Lincoln Center, one was greeted by a huge stage design with three tiers and individual “boxes” for each musician. It was the likes of stage design that hasn’t been seen before in the world. As everyone took their seats, a countdown on the screen started counting down the final thirty seconds. It was with the dimming of the lights that the voice of Jewish radio, Nachum Segal himself, graced the stage and introduced the Yosis Symphony Orchestra conducted by the incomparable Yoeli Dikman. Between the impressive picture of Yoeli in his coat tails waving his hands and conductor baton, and the amazing reimagined HASC overture with the awesome light show, everyone was astounded and prepared for the show of a lifetime. With the final notes dying down, two tall Chassidic men with long beards walked onto the stage. The orchestra started playing and the words Baruch Hashem echoed throughout David Geffen Hall. This was Zusha’s debut HASC performance. Within minutes they were joined on stage by the talented Levin brothers, a.k.a Pumpedisa. The two groups rocked out to the song Baruch Hashem which they released a year and a half ago with the producer of the song, DJ Matt Dub performing above them on the highest tier. It was the perfect way to kick off the concert. Everyone was clapping and singing along.

Now that the show was underway, everyone was anxious to see who would be the next act. The booming voice of Nachum Segal announces that for the first time ever, both Abie Rotenberg and Shlomo Simcha, who have both individually graced the HASC stage before, were making their HASC debut performing as AISH. Everyone knows of these classic AISH hits, which have been sung at our Shabbos tables and played at so many chuppahs. Now they were being performed for the first time on the HASC stage. Mega hits like Birchas Habayis (Yehei Zeh), Ilon, Habeit, Mi Adir, Yedid Nefesh and Hiney Lo Yonum. Both young and old in the audience were amazed at how good Abie and Shlomo sounded, almost like the albums were released yesterday. With the medley winding down Abie announced that a NEW AISH album is going to be released in the next few months and that they were going to perform a song off the new album for the FIRST TIME. The new song was titled Lo Matza and like Shlomo Simcha urged, after hearing the chorus a few times we ALL joined in. It was magical and the orchestra was tremendous and with Shlomo Simcha giving Yoeli Dikman a huge hug, Aish was finished.

If I told you the next performer walked on to stage holding an umbrella, what would you say? Would you be able to guess who it was? Making his HASC debut was superstar singer and former HASC counselor Mordechai Shapiro. There is something electric about Mordy that forces everyone to stop and pay attention. His charisma is almost tangible and everyone is smiling within minutes. Mordy’s set included his mega hits Machar (hence the umbrella), Yachad and of course Schar Mitzvah with the song’s composer Elie Schwab getting a shout-out. Mordy dominated the stage and the entire audience, no matter their age, was mesmerized at his performance and vocal prowess. With a hello to his wife, parents and in laws, Mordy’s time was up and we all said goodbye.

Nachum Segal announced that the next performer would be making his HASC debut. Beri Weber started off on a rather slow but moving note. He performed his hit ballad Riboin, initially joined by just the pianist and the cellist, and of course the rest of the orchestra joined in for a strong finish. Everyone was quietly watching this beautifully haunting performance as Beri belted out Ki Al Rachamecho, which was definitely a HASC highlight. With the final notes trailing off, Beri paused. Then he turned to the audience and said let’s get this party started, as he invited the talented DJ Matt Dubb to join him and they performed his song Adama Veshamayim. On the center of the stage on the third tier where the choir had been all night, a spotlight shows Matt Dubb with his turntables. Once the beat kicked in by the “Hey Ya” part, David Geffen Hall was hopping. Then in a surprising move, Beri walks behind the stage only to magically appear in the DJ booth on top. It’s no wonder that this song is so huge right now, with three versions of it being released this past Motzei Shabbos. When it was all over, Beri left the stage to thunderous applause.

At this point we had already seen so many big names and so much talent, what could possibly be next? Nachum asks if there is anyone in the audience over 50. Then he asked if there was anyone over 60, because the next act hasn’t performed together in over 30 years. Introducing Yossi Toiv (aka Country Yossi), Nachum Deutch and Heshy Walfish as Or Chodosh. Back in the day, Or Chodosh was everywhere. They had hits that were sung worldwide, and now it was time for a reprieve. The trio performed their greatest hits including; Aileh Vorechev, Aromimcha, Oh The World, Yiru, Shi Hama’alos and others. Keep in mind Or Chodosh also introduced the world to golden classics like Reb Shmuel Brazil’s Shmelkie’s Niggun and Bilvavi, which are still sung today. Whether you were a millennial or older we all enjoyed their JM classics performed by the original group.

Next chairman of the board Jeremy Strauss walked on stage. He praised Camp HASC’s amazing work and said if it wasn’t for Sheya Mendlowitz vision and the first HASC concerts, he would have never became a Camp HASC counselor let alone board member. Jeremy thanked Eli Gerstner for all his hard work putting together this year’s show as well as the past few years and announced that Eli was going to perform a brand new song written specially for the show. Eli then walks up to the piano and explains that the new song titled “A Special Angel” was composed by himself with lyrics by him and Yossi Toiv. Gerstner then invites YBC star soloist Shlomo Schachter to join him on stage. The song was very moving and emotional. It spoke about parents of a child with special needs and how they are like angels. Shlomo’s voice really shined and reached great heights as it blended beautifully with Eli’s. It seems that for the first time in years, HASC has a new original song to call its own.

Next Mr. Segal announces that although the next performer has never been on the HASC stage, his songs have. It’s time to welcome World renowned composer and singer Yishai Lapidot. Can you imagine? Thirty two concerts and we have never had Yishai on stage?? I know I wasn’t the only happy person in the audience. We all started cheering. Yishai starts off his set with his world renowned song Aleh Katan originally performed by Avraham Fried. Hearing a composer sing his owns songs is really special, because you are experiencing them as he did when he created them. As the music continues Yishai yells out, ladies and gentleman please welcome my good friend Mordechai Shapiro. The two went on to perform Yishai’s hits including big hits like DEDI’s Vekovei and Hu Yigal, Oif Simchas hits including Dor Metzuyan and Shalala (Eishes Chayil) and finally Modeh Ani from Avraham Fired. The duo was on fire and the audience was eating it up. It was like going in a time machine of Jewish hits with Mordy and Yishai.

On a silent stage, the images of fire started flashing on the big screen as the first notes of the song Aish starts up, it’s time for Yaakov Shwekey. Shwekey walks on stage and just jumps right into this hits song “time to light the fire now.” No introduction necessary. Coming off the success of his recent album Musica, it was time for HASC to experience Musica live. Yaakov’s performance coupled with the orchestra and light show was a spectacle to behold. From there things only got better and better. Next Shwekey performed his hit Your Time with a shout out to the lyricist Sruly Besser, the famed writer/editor of Mishpacha Magazine who was in the audience, and then an Am Yisrael duet with the songs composer Yishai Lapidot. Seeing the two performers in their almost matching vests having fun was so enjoyable. The song was filled with such energy and the two kept trading off vocals and harmonies. Things then slowed down with A Perfect World featuring a new video soon to be released for the song. What happened next was one for the books. Fans far and wide fell in love with Shwekey’s album Those Were The Days featuring hits we all grew up with. Yaakov was joined by the veteran composer Abie Rotenberg to almost re-create the Journeys medley. Songs like It’s Time to Say Good Shabbos, Memories, The Man from Vilna and There’s No Place Like Home. The audience will remember that performance for many years to come. Yaakov thanked Abie for his amazing songs and so started the final medley. Yaakov’s final set included the hit songs Ma’amin Benisim, Im Eshkochaich and the entire cast joined Yaakov for the finale of Et Rikod. Being reminded of the sheer amount of talent and performers again all at once on the stage, I was amazed at this show. Yes, it was three hours long with no intermission, but it was also continuous high quality entertainment. Eli Gerstner, you have outdone yourself again and will be written up in the JM books as a producer extraordinaire.  May we all be invited to next year’s HASC concert in Jerusalem. Amen. 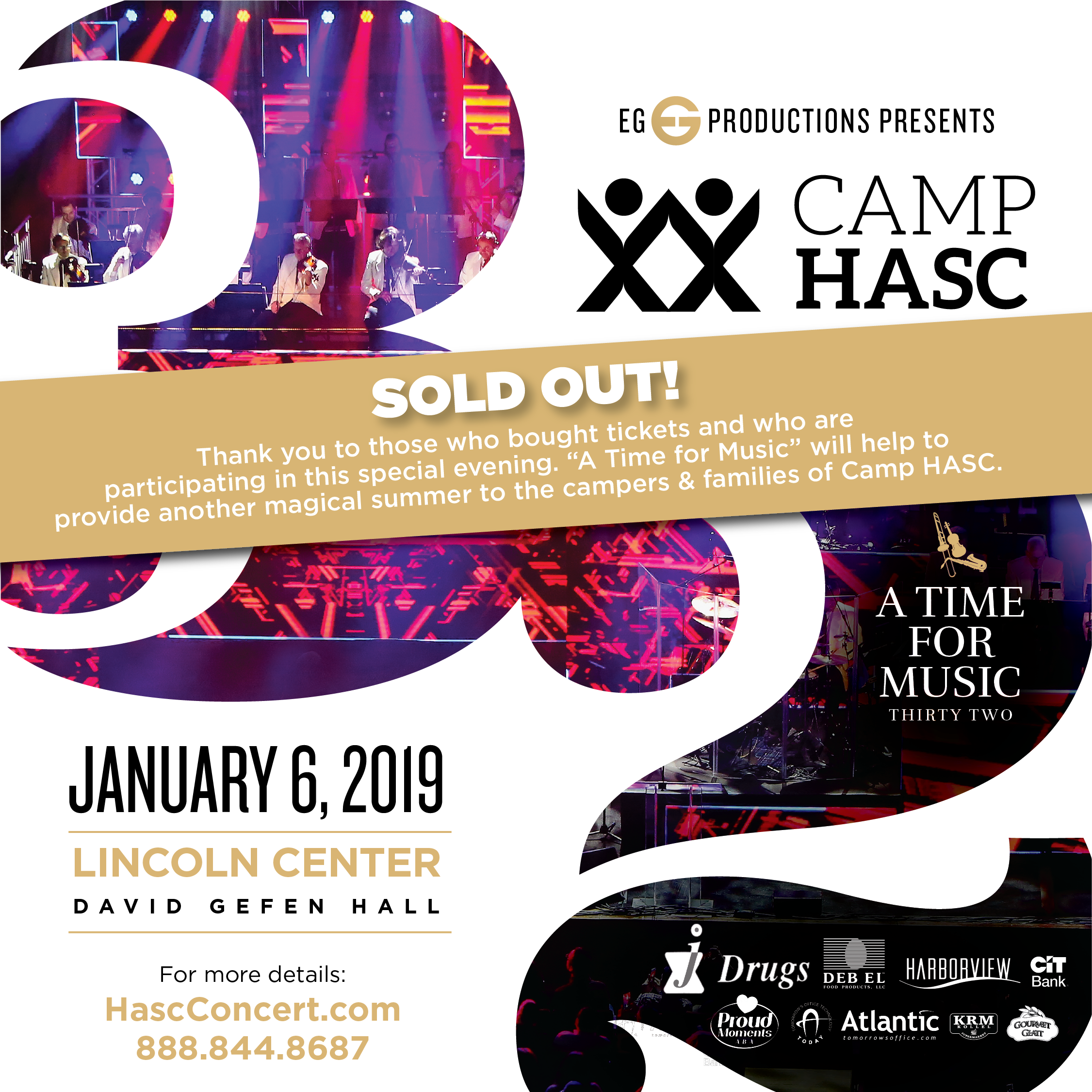 A Special Night for Our Special Children.